As the title suggest I'm rebuilding some stuffs of the game such as scripts, background and some gameplay.

What changes you can expect:-

The game will be made for Android first, as I'm pretty sure PC can handle the game well. It will be updated every time 3-5 levels are done.

There will be one more new enemy that can have fun with Hailey.

This is how the UI and first level is going to look. The touch controls can be changed in pause menu. There are few more details that need to be added and then I will release this test version to check the compatibility with android devices.

Note:-Not added vocals and sound effects to sex animations yet. I have too many options so trying to figure out a way to use most of them.

The image below has minor spoilers. 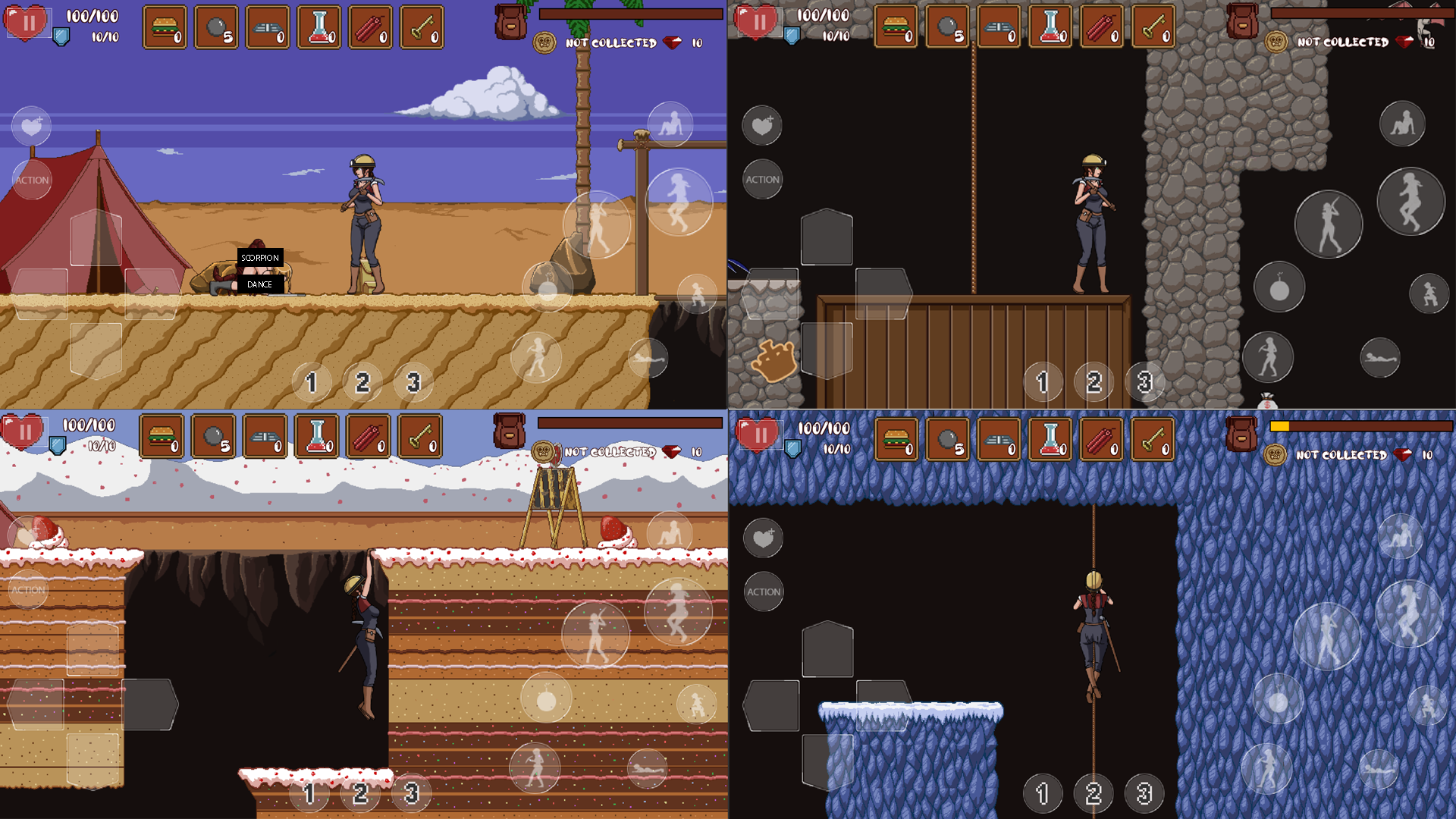 My apologies for frequent delays. Will compensate these delays with something good at the time of final update of this game. For now I want to keep that content secret but I'm sure it will be appreciated.

Thank you for the patience.

Found what I presume is a bug, maybe an intentional cheat not sure. Tapping the sandwich icon instead of the heal button both heals and adds more sandwiches for mobile.

Debug feature which will be removed on full release.

how much time you need to update a new version of this game?i am so excited for it

I was gonna say until v.0.1 of new project but a lot of people seem pretty excited for an update of this game so I will work on it as soon as demo of new game is launched.

Rebuild have better graphics and features. Old one is how the game was before.

Hi there, I found your game randomly and I have to say it is one of the most well constructed games like this that I've found, smooth animations, few bugs that (That I've found anyway) the storyline while basic provides drive for the protagonists and the twist on stage 8 was not expected at all but very nice to find.

I do have a question though, the gallery for all of the animated scenes, you have a perfect showcase for it in Annies' drone that follows you around that she uses to watch you, she even talks about it a bunch about how she could "stay in the tent and watch you just fine" why not use almost like a floating drone point of view for the animation gallery, have the camera move around very slightly  and play "saved files" from when she recorded the enemies interacting with you? I feel it would add just a bit more canonical immersion to it (Even though I know it's not MEANT to be immersive at that point), it could also bring up further conversations between hailey and annie later one "You know you need to delete those right?" sort of thing, just some ideas that have been bouncing about in my head!

Hello, I find it difficult with how much mess the project file is right now. I will consider such option on future project.

Yes, just make sure you see hint near puzzle in level 16.

there is a bug with the rope on level 11 where if you get hit by the flying bee and the zombie is directly under the rope, you're permanently stuck unless you restart the level

i downloaded 0.6.3 but it's also showing up as 0.6.2 for me, probably just a minor error LAGS forgot to change.

I just realized you meant vocals.

Glad you got what i meant! :D

I found this fancy key in level 15 in the secret goblin area, but I found no where to use it. I also think I missed a few hidden goblin scenes. I only have 3 in gallery and 2 in secret goblin area of 15. Also, does the zombie girl do anything yet?

there is a small ledge on 8 with a candy came pointing to the left. Crouch or crawl at the wall and is in a small hidden cave. I don't think 11 is hidden. It was near 2 goblins and some green swamp water.

so what does the green melon and yellow icon mean with the zombie? He bangs the shop girl but leaves Annie alone, am I missing something?

What do breast have in common in size?

(Spoilers for those who have not played the update yet below)

Great update, and your animations are on point! The poster girls are very vell made!

Thank you for this update!

The icon explains why it skips Annie but attack Hailey or shop girl.

I may add option of double clicking on it so it play's climax animations of those npcs.

I assume it's the boob size. But the shop girl don't have big boobs. In fact Annie has bigger than her. So the bubble makes no sense at all.

I love animations in this game! Would you like to add a zoom slider to the gallery?

I can't promise right now but will keep this option in mind.

But first off. THANK YOU for you continued development and hard work on this game.

And before bugs some thoughts on content of this update:

That is all I was able to find and recall.

Once more thanks for update, keep up the good work,

I will come back with solution soon. But I can answer some now-

12. There are no proper climax animations for those just a single frame(except for shop keeper). If you replay or restart level 15 you will notice sometimes those animations are not playing indicating goblins are recuperating.

13. It is overlapped by Annie's animation.(Will create a smaller sprites instead of stand.)

15.Now this has confirmed. Will make a new version of Ass-ass-in.

1. Edited script so it will stay dead.

3. It was suppose to send you to map menu but forgot to do so for PC version.

4. I thought I corrected them but it seem got confused because both projects were open at same time.

5. Thank you for noticing it. It will be solved.

6. It was immediately destroyed after collection.

8. Happens because of pumpkin tokens.

10. Thanks for noticing it.

11. It is using same audio file in both modes.

Most issue are addressed and will launch a version in while along with Android one.

As always, thank you very much for reporting this issue at earliest as possible.

Not a problem and thanks for your work.

Bro when is android update 0.6 commin 😭

Less than a week.

Saves remain and can be used in all versions.

Hey LAGS! great game, I love it. This is the final update or it's one more after 0.6?

By what LAGS posted before "Final release will be 1.0". But there is plan for extra content past that or with that, the "Annie's Expedition", with three extra levels. There should be 24 or 25 levels with Hailey.

And another stuff,not a important glitch but still,if you run out of workXD, on level 10 if u try to stand in areas where you should just crawl or prone,you will glitch the walls and walk half inside em.